A Shareholders Agreement is an agreement between various shareholders of a company that addresses many important issues such as:- 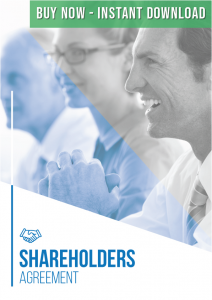 Having a well drafted agreement in place becomes imperative if there is ever a dispute over a material issue, particularly regarding the exit of a shareholder.

You should ensure it is highly customised and adapted to suit the specific issues involved in owning and managing your particular company.

The first and prime reason is that it provides an exit strategy. Without such an agreement, the selling shareholder and the other shareholders must reach an agreement on a value of shares and stock. This is frequently a difficult task in closely held companies, particularly if the remaining shareholders have little to no interest in purchasing the shares. 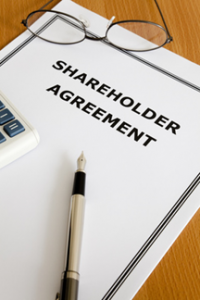 On the other hand, where a company has grown to be successful so that there is actually an outside market for the shares, the agreement allows shareholders to have control over any sales of shares to outside parties. This is done by a provision in the agreement that the shareholders have “a right of first refusal” to purchase any shares being sold, before the shares can be offered to outside sources.

Shareholder agreements can also ensure ongoing control of the company.

For instance, if a shareholder was married at the time that he gained shares in the company, the shares may be considered community property under state or Federal law. In the event that the shareholder does actually get divorced, his or her ex-spouse will have an ownership interest in one-half of the shares. The agreement has a provision that in the event of divorce; any shares held as community property by an ex-spouse MUST be sold back to the company.

Another circumstance where a the agreement provides “control” to other share-holders is in the event of the death of a shareholder.

If there is no agreement in place, then the shares owned by the deceased would either be inherited by the person or persons designated in the shareholder’s will.

Or, if there is no last will and testament, the shares may be frozen by the state in probate or in a legal case involving the decease estate.

Either way, the remaining shareholders have no control over the person or persons who eventually become Co-owners of the company with them.

Shareholders Agreements commonly include provisions that each shareholder agrees that in the event of death, their executor will be bound to sell the shares back to the company.

If you hold shares in a company – it is in your best interests to insist upon a written agreement – if you don’t you are putting your investment at risk.

DIY Shareholders Agreement Legal Kits are a cost effective way to create your own quality and professionally drafted Agreement.

RP Emery & Associates has been supplying Australians with quality legal documents since 1990, empowering you to create and implement your own Agreements.

For more information on the DIY Legal Kit, follow the link below.