An Indemnity Agreement Form is a legally binding promise given by one party to indemnify or release another from any claims, actions, losses or liabilities in respect of a particular event or transaction.  In effect, one party agrees to accept the risk of loss or damage on behalf of another.

It can be used in a variety of situations, including:- 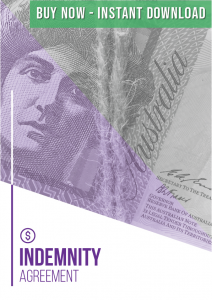 In each of these instances, an indemnity clause works by shifting financial and legal responsibility and re-allocating risk from one person to the other.