Sometimes it makes sense to purchase a home or investment with other people. This may enable someone to enter the property market where they may not have had the finances or backing to do so on their own. A Tenants in Common Agreement is an agreement which can be used where two or more people are planning to purchase property together. It is also referred to as a Joint Ownership Agreement.

The agreement sets out some very important issues relating to the shared investment.  It confirms the percentage split, addresses monetary obligations, mortgages and insurances, and the more practical issues involved in owning a property with another, as well as some of the unexpected issues which may arise in order to minimise uncertainty and prevent any disputes that may occur in the future. 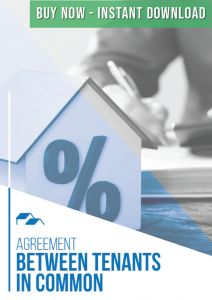 A Tenants in Common (Joint Ownership) Agreement allows you to set out the terms and conditions of the relationship between the joint owners up front.  It provides you with a clear document which you can refer to at any time and have recourse to if needed.  It also allows you to address issues you may not have previously considered when deciding to purchase the property thereby providing a way of dealing harmoniously with unexpected issues should they arise.

What is the difference between tenants in common and joint tenants?

The biggest difference between joint tenants and tenants in common is the property rights in the event of a death of one of the co-owners.

A Tenants in Common (Joint Ownership) Agreement allows you to set out the terms and conditions of the arrangement between the joint owners in writing.

In a Joint Tenancy , when a co-owner dies their share of the property passes to the other owner/s.  It is common for married couples, for example, to own their property as ‘joint tenants’ with their spouse.

Where property is held as ‘tenants in common’, the share of a deceased co-owner will be dealt with according to their last will and testament, or if they die without a will, according to the rules of the state.

This is the main reason Tenancy in Common is much more often found than Joint Tenancy.

Can I sell my ownership interests to other people?

Yes and no.  The Agreement Between Tenants in Common allows co-owners to sell or otherwise dispose of their portion of the property, but usually not without first offering their fellow co-owners a chance to buy their interest.  This ‘right of first refusal’ is often included in such agreements to allow the co-owners a chance to match the price the seller would get from the prospective buyer.  The manner of notice and acceptance of these offers should be clearly stated and described.

A Tenant in Common Agreement Kit is an easy and cost effective way to create your own contract.

RP Emery & Associates has been supplying Australians with quality legal documents since 1990, empowering you to create and implement your own Agreements.

The Tenants in Common Kit contains 3 types of agreement to cover the most popular arrangements between joint owners.  These are:-

For more information, or to download your own Tenants in Common Agreement DIY Legal Kit